Many people think that celebrities will get a pass when it comes to immigration, this is just not true. No matter what your status is, people get denied visas or entry to countries every day. Most recently, Tennis star, Novak Djokovic, was denied entry to Australia. The story has been complicated and controversial but we have the immigration reasons behind the denial.

Why Was Novak Djokovic Denied Entry?

Many Australians were outraged when Djokovic, who has stated his opposition to vaccination, was granted a medical exemption to compete in the competition for unclear reasons. Although more than 90% of the country’s adult population is fully vaccinated, they are nonetheless subjected to limitations as the number of instances of illness rises.

Then, just days before the tournament,  Australian Border Force (ABF) officials said that Novak failed to provide sufficient evidence for his medical exemption.

What Novak Should Have Done to Enter Australia

The whole reason Novak was denied entry is that he failed to provide sufficient evidence that supported his medical exemption.

A qualified Immigration Lawyer should have provided Australia with enough evidence that they would have allowed him to continue with the tournament with no problems.

Professional Help Can Increase Your Chances of an Approval

Even though you can submit your own TRP application, we do not recommend this. Canadian and US immigration regulations are strict when it comes to even minor criminal offenses and even for offenses that have occurred many years ago.

TRP applications can have a higher risk of refusal in cases where the application is not properly prepared. We find this is the number one reason why people are denied entry is due to not enough knowledge of the ‘ins’ and ‘outs’ of TRP applications.

It is always important to consult with an immigration lawyer regarding any possibility of refusal or denial of entry.

Hello! I am one of VisaPlace's many immigration news contributors. Comment below if you have any questions or comments about this article.

Can I Cross the US/Canadian Border Without a COVID Vaccination? 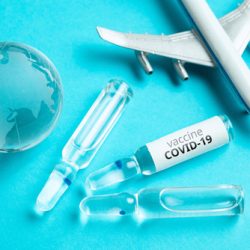 Visitors to the US Required to Be Vaccinated